Alanna Julian recently returned from a trip to the US to attend the United Nations Conference as a an Advocate for people with Disabilities. Alanna has shared her story so we can all hear about her exciting trip.

My experience at the United Nations Conference of State Parties

This year I was selected to attend the Conference of State Parties United Nations Disability Convention in New York United States of America. My OPTIONS friends may have heard that I like to do public speaking outside of attending Options Theatre Company.  As well as enjoying my performing arts, I also advocate for people with disabilities, a big passion of mine.

I am a member of the Convention on the Rights of People with Disabilities Australian Shadow Report Committee as well. This committee works on gathering information from people with disabilities in Australia, about how their human rights are being upheld to put in a report to pass on to the United Nations. It was through this work that I was nominated and selected to be an Australian Disability Delegate to attend the Conference of State Parties United Nations event.

At the UN Conference they have the General Assembly where governments meet to discuss issues.  Also, there is something called ‘Side Events’ where panels are formed by people with disability and advocates who discuss various items or share information. I was selected to co-chair and present on a Side Event that was focused around health and social inclusion for people with intellectual disabilities, and explain why social inclusion is important for good health outcomes. I co-chaired the panel with Dr. Michael Kidd who is the Director of the World Health Organisation, along with other self-advocates, Diana from Moldova and Korey from Canada.

I attended the UN Conference with support from my Manager (Kylee) and work colleague (Courtney).

When the day came to fly out, I admit I was both excited and a little nervous as this was my first ever big trip overseas and the longest flight I’ve ever been on (20 hours.)  I flew from Sydney to Los Angeles and then on to New York. During the flight I found lots of movies to watch to keep entertained and good food to munch on.  However, when we flew into LA I found the immigration/customs process a little intimidating and fast paced. I did struggle using the machines and knew I needed support, so I told the officer at immigration I needed my Support Worker (Courtney) to help me as he was becoming very short with me.  My best tip here is to speak up and explain your situation as he calmed down after that, thank goodness! 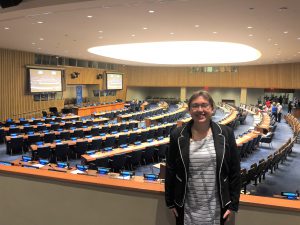 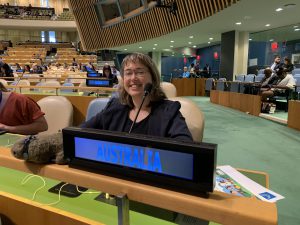 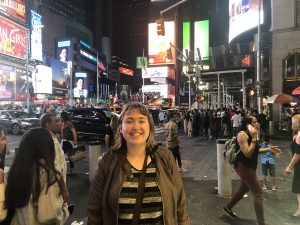 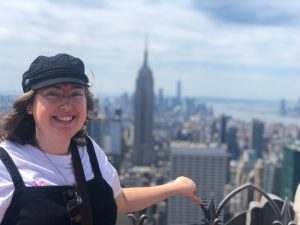 Before the start of the UN I had a few days to go sightseeing. My first night in New York I went to Times Square and was amazed by all the lights and the buzz!  Over the next few days I got to visit such places as Central Park which was beautiful. They had Shakespeare In The Park which reminded me of the Options ANADA Group and the Shakespeare we work on, Grand Central Station (just like the movies), the Public State Library which had every book you could imagine! I also paid my respects at the 9/11 Memorial. Finally, a GIANT slice of pizza! which was thoroughly enjoyable.

The first day of the UN was networking with the other Australia delegates at a reception. About 24 people had been selected and this included people with disabilities (and their managers), participation support workers and also people from government. I was told at that Reception I was the only person with an intellectual disability selected, a big responsibility – so no pressure!

The Australian delegates were all such friendly, passionate people who care about disability and human rights. I made some new friendships along the way too!

On the day of the side event, I co-chaired I was nervous and excited at the same time.  On the panel Dr. Kidd, Diana and Kory who I met for the first time on the day… such lovely people thrilled to be working with them!

As is tradition at these events, it starts with someone banging a gavel like the judges in a courtroom.  Unfortunately, they handed it to me and I smashed it down a little too loudly scaring half of those on the panel!

As the session started, Kory a person identifying as a person with a disability, spoke about the impact of being excluded and how he felt about. He discussed how this affected his health and how the two are linked. He also discussed the idea that “Healthcare professionals are not always trained properly in how to support people with intellectual disability and don’t include them in decisions about their healthcare.”

Diana went on to speak about her life in an institution, where staff ignored and humiliated her and also discussed how she received poor healthcare from doctors. After getting out of this institution she then went on to share accommodation and she is now part of a community who treat her with respect. She now has a lot more opportunities, including becoming an advocate on the global stage.

When I spoke about social inclusion, I shared my story about how I go to a drama group called Options Theatre Company two days a week, and how I formed friendships at this group which have been important for my well-being. I also spoke about the ways that drama allows my friends and I to express ourselves in a safe environment, leading us to feel included.

After our talks, Dr. Kidd said “I’m sorry that so many members of my profession have not treated people with a disability with kindness and respect.” He said his greatest teachers are his patients, they are the ones who are telling him about their diagnosis and that we cannot cut off our patients and need to be better at listening to those relying on us to provide care.” I could see that this brought tears to people in the room with his genuine apology.

When it came time for questions we got a black out in the room and in pitch dark, we still carried on and finished the event on a good note.

My highlights during the United Nations.

As well as the highlights, I did have my challenges, such as I struggled to understand some of the high-level political information and talks at the UN.  My flight home got cancelled and the only option was to travel back to Melbourne and then on to Sydney which took such a long time to get back, feeling pressure and moments of being rushed.

Of course, the Jet lag as anyone would agree can get the better of you!  However, overall it was an amazing experience, one I will never forget!